Don’s Review – Spirits in the Rhode 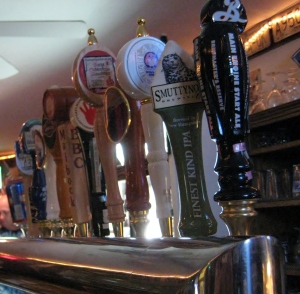 “A long time ago, in a galaxy far, far away…” we were relaxing at home watching a Star Wars marathon on Spike TV before going to Track 84 Pub in Warwick last Saturday night.

As we comfortably settled in front of a row of taps at the bar, with the television set to the very same movie, my wife and I commented how we felt like we were still in our family-room enjoying the movie.  Track 84 Pub has been making people feel welcome since 1990, and has been a microbrew hot spot for the past ten years. Although I had read about it in the Yankee Brew News for years, shockingly I had never been there before…so many beer bars, so little time! The bartender even mentioned that some devoted patrons had even driven 4 hours to get there!

We popped in to the Kilvert Street Pub in order to kick off our evening before heading out to The Grill on Main in East Greenwich to see our friend’s band Brian McKenzie and The End of the Line. The bar was not crowded and had a relaxing and peaceful feel. Track 84 is a premeditated destination because you’re not likely to drive by it unless you happen upon Kilvert Street or someone tells you about this cool “find.” Kilvert Street used to be the main cut-through between Post Road and Jefferson Boulevard, but Coronado Street now serves that function as Kilvert is now a dead-end.

The beer choices are serious – 22 on tap and over 50 bottles including stuff I had never heard of before. It reminded me of a time years ago when I was in a French restaurant in Montreal and over-confidently asked for the wine list in order to make an informed decision. Thinking I was rather “wine savvy,” I was quickly humbled when presented with a list of wines that could have passed for the Dead Sea Scrolls! The beer choices at Track 84 Pub , while not as voluminous, were just as far-reaching and eclectic.

First up was the Southern Tier Oak Aged Unearthly Imperial IPA from New York, and at 11% alcohol, this stand-out beer did not leave that astringent aftertaste that some strong beers do. The delicious “Unearthly” is properly served in a 12 oz. tulip gl ass and drinks well on its own, but would work equally as well with food. It had a wine characteristic to it, and would pair well with any Italian veal or chicken dish. You may only want one or two of these, as it is not a session beer!

Next up was the Oskar Blues Dale’s Pale Ale from Colorado.  This is a fantastic American Pale Ale clocking in at 6.5% alc. You could drink this one all day – a Microbrew drinkers drinking beer. Even though by definition a “Session Beer” has less than 5% alcohol, I would session this one.  My wife liked this one best and since I like her and I like beer – let’s just call this one a “win-win.”

Last up was the Great Divide Brewery Oak Aged Yeti Russian Imperial Stout.  This brew was simply incredible! Aged with a blend of French and toasted oak, it presented a complex flavor of oak, vanilla, coffee and chocolate yet still maintaining a robust bite of hops. Clocking in at 9.5% alcohol, it too was correctly served in a 12 oz. tulip glass.  I absolutely loved it. I’m looking for an excuse to go back just to get this again!