I’m not entirely convinced that just because you can put any topping on pizza, you necessarily should! Additionally, I remain contemplative on whether certain ingredient combinations balance more harmoniously when subject to the wrath of a coal-fired inferno. And finally, is the quality of pizza crust really so damn important?

Well, the owners at Providence Coal Fired Pizza clearly take these questions to heart. Utilizing an eco-friendly, custom-built oven that fires up at a face-scorching 900°F, their chefs can lock-in flavor complexities, while producing an envious crispy crust that maintains a terrific chew. Most of the cooks working the ovens have no eyebrows, but facial hair is overrated anyway.

Providence Coal Fired Pizza is a welcome addition to the downcity restaurant landscape because it maintains several very appealing qualities. The atmosphere is energetic and fun. The knowledgeable staff is welcoming, attentive and extremely proud of their entire operation. The menu price points are exceedingly reasonable for its location, and most importantly, the food is absolutely worth writing about!

Our party of four started the evening off with some drinks and the Coal-Fired Wings (sea salt, rosemary, and roasted onions). I spotted another table getting this starter and was immediately drawn to the fire roasted caramelized onions blanketing the wings as if it were sheltering them from the light. The wings were perfectly spiced and a bit smoky. The onions were mild, sweet and had just enough char to remind you where you were eating. 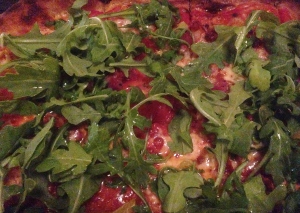 Our entrees included the sharing of two pizzas that seemed to speak to us. You could say that the pizzas chose us, but that’s neither here nor there.  The first was a Nightly Special which included rocket (arugula), pancetta and banana peppers. The second was the Broccoli Rabe (EVOO, sausage, ricotta and provolone cheeses).  The rocket was fresh and peppery, the rabe was not bitter, the ricotta cheese was creamy, and the sausage was scratch made.  Ring the bell, we have winners. 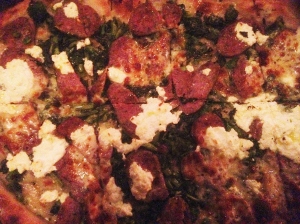 The desert menu was limited, but we were quick to order the oven-fired Fresh Berry Cobbler special, topped with crunchy sweet oats and a side of whip cream. Simple fresh ingredients that imparted a beautiful sauce under intense heat – made the desert a standout.

So, in response to my own initial questions; just because you can put any topping on pizza doesn’t mean you should, holds true.   Providence Coal Fired Pizza will harmoniously balance the combinations for you, and trusting them to do so might be the best decision you’ll make the entire evening.  And finally is the quality of pizza crust really so damn important? Perhaps you should stop by Providence Coal Fired Pizza and make the damn decision yourself!