At age 15, I landed my very first job at the mall pizzeria in New Jersey.  The family was a lovable bunch of yellers, and I had come to the understanding that their relentless shouting in Italian was their way of accepting me (one would hope). I was paid $3.35 an hour to serve slices, calzones, sausage rolls and subs (translation – grinders!). In addition to sticking my arms in a scorching oven to scrape it every night, the owners taught me how to make great pizza. I learned to toss and stretch dough, and build “pies” on the paddle before painstakingly sliding them on to the oven stone. New York/Neapolitan style pizza is generally larger in diameter and has a thinner chewy crust – baked without a pan.  Also popular was the square-shaped slices with a thicker dough (much like focaccia bread) called Sicilian slices. This pan baked tomato pie was my absolute favorite because the rich crust was crisp on the bottom, soft and warm in the middle.

Here’s something thought-provoking, Rhode Island maintains more pizzerias than Dunkin Donuts has stores – and that’s saying something! What’s more interesting is that Rhode Island’s strong Italian American population justifies the variations in pizza preparation primarily based upon the region of Italy from which families immigrated. The Sicilian and tomato pies are extremely popular in Rhode Island, and one of the local restaurants worth spotlighting is Pag’s Pizza in West Warwick.

David and Gloria Pagliarini should be admired for an enviable business model. Their most important focus is making extraordinarily good pizza – first! The menu is as straightforward and fresh as the ingredients they use.  Large pizzas are made Sicilian style (square) and small pizzas are made with thinner crusts baked in a round pan. David does an excellent job in creating and properly baking pizzas. Additionally, the menu offers slices, salads, soups, grinders and several pasta dishes – all at extremely reasonable prices.

An absolute standout menu item is the freshly baked Calzones (which include spinach, olives, cheese and pepperoni (optional).  The quality of the baked breads/crusts using Pag’s Pizza fresh dough is worth the trip alone. Their dough, when used to make the larger/thicker pizzas maintains a slight yeast aroma  even after it’s been freshly baked, and that’s where bread magic lives! 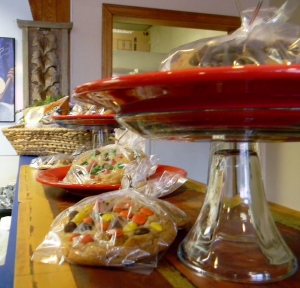 A consistently impressive attribute regarding Pag’s Pizza is that the restaurant is absolutely spotless from “front door to kitchen floor“. They could perform an emergency appendectomy if called upon to do so! Gloria tastefully decorates the restaurant, and frequently changes the furnishings as seasons dictate. The counter often features some freshly baked treats to sweeten up the desert part of your order.

The pizza landscape in Rhode Island is arguably divided into camps – thin & thick crusts, New York style, Chicago deep dish, wood grilled etc. We should be celebrating the diversity of our choices. Quite frankly, if you think your choice of pizza style is delicious – who’s to argue?

I am convinced that restaurants thrive when owners are dedicated to their products, their establishment and their customers. Pag’s Pizza is a shining example of all three, and I feel lucky to have them in my hood.

It’s been over 30 years since I left Villa Pizza and I still miss John and Maria. Although I don’t know what became of the family, I have very fond memories of that which I learned from them, and the pride in which they had for the products they created. Imagine that – pizza being responsible for a life lesson!

One thought on “Pag’s Pizza”