The Duck and Bunny was a fun review because I always enjoy going to Wickenden Street. The Coffee Exchange is probably one of the few places that I regularly gravitate towards, and I’m pumped that I’ve found another one! If you’re familiar with the East Side, you’re aware of the many great restaurants for which to choose. I’m not sure how the Duck and Bunny came onto my food-hunting radar, but I’m glad it did.

As with much of the Wickenden Street landscape, the buildings are older and historic. The area was home to a large Portuguese-American community starting in the 19th century, and as a result, some of the homes on the Street are still painted pastel colors in the Portuguese style. 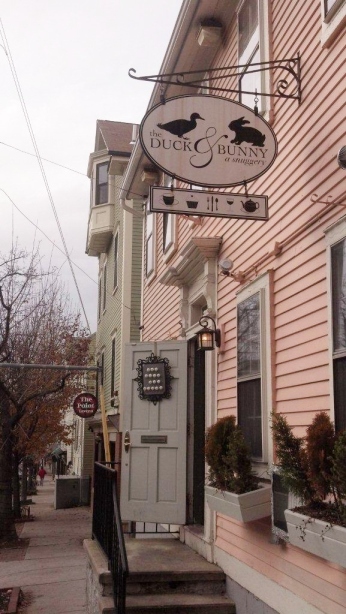 The pink colored Duck and Bunny restaurant was impressively interesting inside and out. The interior layout and furnishings could be best described by imagining if a Victorian Martha Stewart attending Brown University had opened up a snuggery to expose all of her “good things”!   This is one cute place, or maybe romantic is the better adjective. I am glad we hadn’t read any prior press before going because we like the surprise. Open minds and big appetites are the general criteria!

We arrived on a weekend afternoon where brunch menu is offered. As you may be aware, ForkintheRhode publishes an annual New York System Weiner Challenge where we rate Rhode Island’s Top 10 Weiner joints. So when we came upon 2 menu items, the “New York System Hot Weiner Omelette” and the “Ultimate New York System Crêpe”, we knew that ordering it was fait accompli. The other two dishes were the Eggs Benedict on a Potato Pancake (multiple variations) and Portuguese French Toast with Bananas.

The Ultimate New York System Omelette was exactly like what you would expect: homemade meat sauce, chopped onion, yellow mustard, and, of course, celery salt. It tasted just as a New York System should taste – but in an omelet! My only concern is that I’m so familiar with that unique taste after 9 PM with a beer or two on-board; the whole experience was slightly surreal! Regardless, this was a surprisingly respectful “nod” to a Rhode Island favorite.

The last item we ordered was the Portuguese French toast (local sweet bread dipped in cinnamon with maple berry compote or bananas foster with pecans). You can’t beat Portuguese sweetbread for French toast (or Challah bread French toast for that matter) and the taste was both divine and heavenly (by the way, what guy uses words like divine and heavenly?). When I order it next time I’m going to ask for the whip cream to be put on the side. Whether it was the heat lamp from the kitchen or most likely the heat from the entrée, the whip cream arrived mostly melted.

The tea selection delivered in pots versus tea bags is as varied as it is adventurous. Gourmet cupcakes like Banana Nutella, Guinness Cake, Portuguese Sweetbread Pudding and Dark Chocolate Salted Caramel grace the menu begging for a tea accompaniment.

We extend our sincere thanks to the Duck and Bunny proprietors for gracefully excluding both a duck and/or bunny crêpes from the menu. In certain restaurants, it might be a winner, but at the Duck and Bunny – the smoked salmon may be a less horrifying thought!

This is a great East Side spot to unwind and indulge. We know the RhodeCrew was just scraping the surface of all the pleasures this little restaurant has to offer. The Duck and Bunny is a place to take a break from the hustle and bustle of life. Grab a good friend, a good book or both – tuck in and find your serenity!