One of Rhode Island’s many 19th century contributions to the 2nd Industrial Revolution was a steam locomotive manufacturing company located in Providence. Historically, Rhode Island Locomotive Works produced more than 3,400 locomotives between 1867 and 1906.

It is within the walls of this impressively restored building that the Adirondack Restaurant Group has opened their third restaurant. The American embraces the history of its location by meticulously preserving some of her artifacts, and artfully incorporating them into the woodwork.

Our visit to The American was a happenstance. While on a break from a class we were attending in the same building, the lunch whistle sounded loudly on Valley Street, and curiosity got the better of us.

The aristocratic atmosphere inside The American is delivered to diners with a few significant exceptions;   the staff is warm and welcoming, and the lunch, dinner and drink menus are far from being pretentious. In addition to several daily specials, a mixture of classically named burgers, salads and clubs are available.

We ordered The Steakhouse salad (filet tips marinated and grilled over mixed field greens, crispy bacon, hard-boiled egg, gorgonzola cheese, and poppy-seed vinaigrette). The steak was perfectly grilled to the requested temperature and full flavored. The salad was slightly overdressed, but its components were fresh and delicious!

On the recommendation of our waiter, we ordered The Stanford (marinated blackened chicken breast topped with Wisconsin Cheddar, lettuce, beefsteak tomato – served on a fresh-baked sourdough roll with a homemade Cajun mayonnaise).  Although the slightly over-grilled chicken breast could have been disappointing, it was aggressively seasoned the way a piece of chicken should be! The ripened tomato and spicy Cajun mayo added the needed moisture, taste and heat to make my mouth hum!  Additionally, the sandwich arrived with homemade tater-tots! In the past, I’ve overpaid for poorly executed and previously frozen tater-tots with truffle oil.  Thankfully The American cares enough to shred fresh potatoes and perfectly fry them into something worthy of remembering. 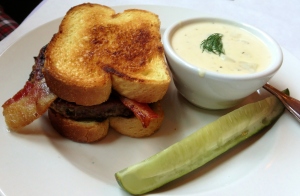 It should come as no surprise that since The Abbey , a sister restaurant to The American which specializes in innovative burgers, also does a fine job in serving the same. Our Roosevelt with bacon and Wisconsin cheddar, served on homemade toasted bread was a noteworthy standout.

About two hours later, as our class was letting out, we headed back into The American to belly up to the bar for a couple of beers. We couldn’t resist an opportunity to make another appearance in a place where we felt so comfortable. 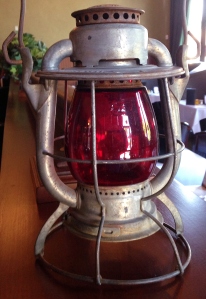 Many of the wealthy and powerful 19th-century American Industrialists (aka robber barons) such as Cornelius Vanderbilt,  J. P. Morgan,  Jay Gould and John D. Rockefeller adorn the walls of The American as if to keep  watchful eyes on the place.  I wondered if they would have approved having spent an afternoon at The American, and then it came to me … who really gives a damn.